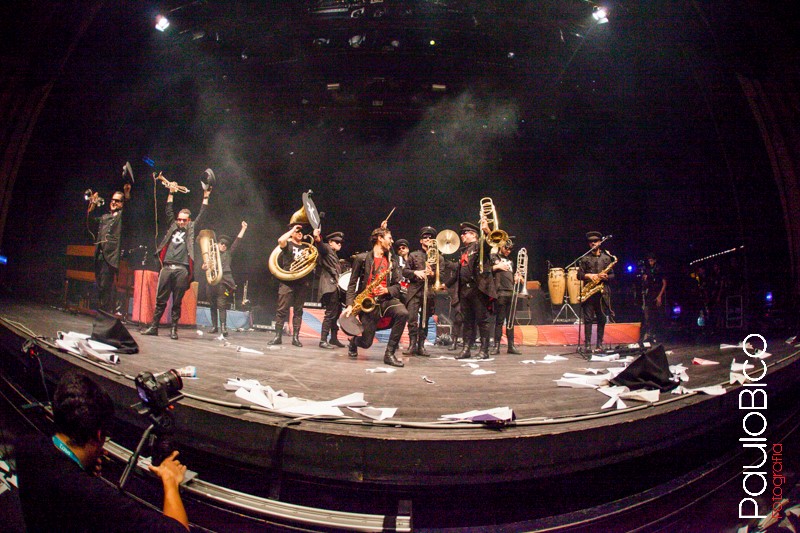 Thrilling, innovative and ecstatic, Káustika is an original band from Águeda (Portugal). With musicians from the most diverse fields of music, Káustika is a project that merges different sonorities and styles in an unique and innovative way.

The combination of different schools, genders and musical languages culminates in the creation of two spectacles, with distinct and clear styles: ‘Punk Filarmónico’ (Philarmonic Punk), an itinerant show designed for street performances, and ‘Transe Sinfónico’ (Symphonic Trance), planned for spectacle rooms and stages.

‘Transe Sinfónico’ album and ‘Punk Filarmónico’ EP make up the band discography which has shared the stage with artists such as Trilok Gurtu, Bezegol or ‘Os Azeitonas’.

It has been in the most influent stages of Portugal, ‘Coliseu dos Recreios’ (Lisbon) and ‘Coliseu do Porto’ (Oporto), and have performed in several festivals such as ‘BOOM Festival’, ‘AgitÁgueda‘, ‘Imaginarius’, ‘Porto Beer Fest’, ‘Andanças’, ‘Oito24’ among others.

To the sound of Káustika, independently of the place of the show, there is always an uncertain destiny, the trip though, is guaranteed!